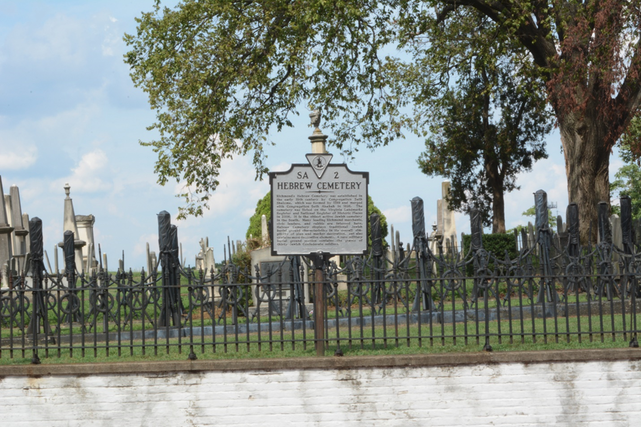 The Hebrew Cemetery opened on Richmond’s north side after the city designated two acres for the burial of free people of color and enslaved persons. The city council approved the conveyance of one acre for Hebrew burials because of the crowded conditions at a Franklin Street burial ground. Arrangements were made to transfer Jewish remains to the new burial ground, where the site was laid out in a grid pattern with graves facing east. A small ritual house was erected on the spot for the preparation of the deceased for burial. The site was called the “Jews Cemetery,” the “Jews’ burying-ground,” and then “Hebrew Cemetery.”

In 1898, a brick chapel was built to replace the cemetery’s earlier ritual house as shown in the photograph below. The cemetery expanded several times from 1871 to 1920, including a separate addition across Hospital Street to the south. The Hebrew Cemetery now holds over 2,600 burials and burials are currently ongoing.​

The photographs below also show a cemetery which is managed and maintained in pristine condition.